Moira qualified in 1978 in Glasgow, Scotland and received the prize for the best student in her final year from all 3 Physiotherapy schools combined in the City.

She moved to South Africa in 1980 and commenced work at Mines Benefit Hospital Johannesburg.

She commenced Private practice in 1990 at Milpark Hospital working in the Neurosurgical unit ran by Dr F.D.Snyckers.

After a year or so Milpark opened their Trauma unit and she was approached to supply a physiotherapy service, whilst continuing with the Neuro Surgical I.C.U. Moira has completed various courses, including O.M.T. 1 Dry Needling and a variety of Medico legal courses.

She is a member of C.P.R.G. Special interest group.

Moira has been fortunate to contribute to a new textbook in physiotherapy called Cardiopulmonary Physiotherapy in Trauma. This offers valuable insight into advanced trauma life support and acute care management of patients in the trauma setting. This includes the physiotherapy treatment aims, intervention strategies and precautions to treatment. The book is to be launched on 16 September 2015 at Wits. 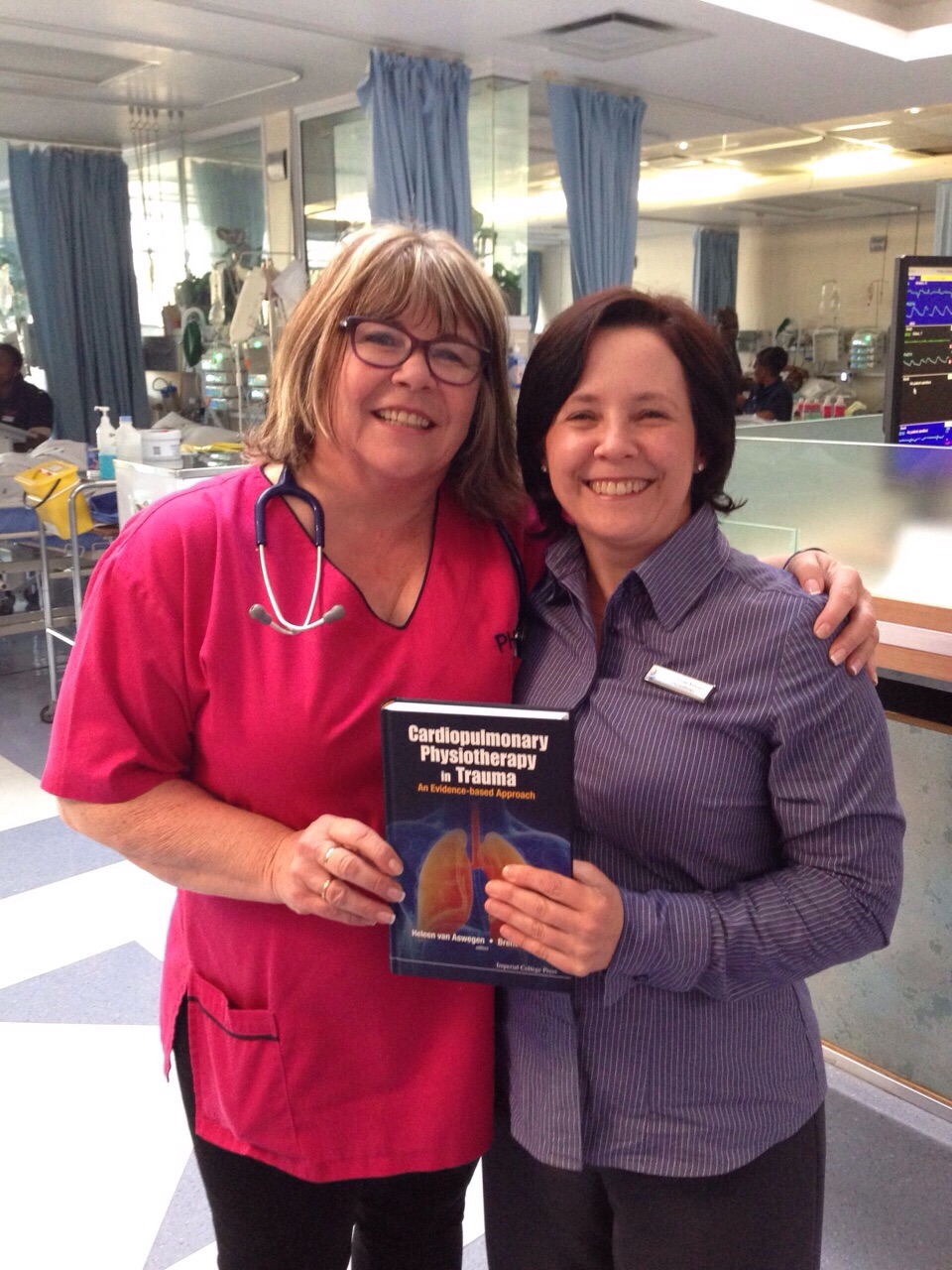 Moira, on the left 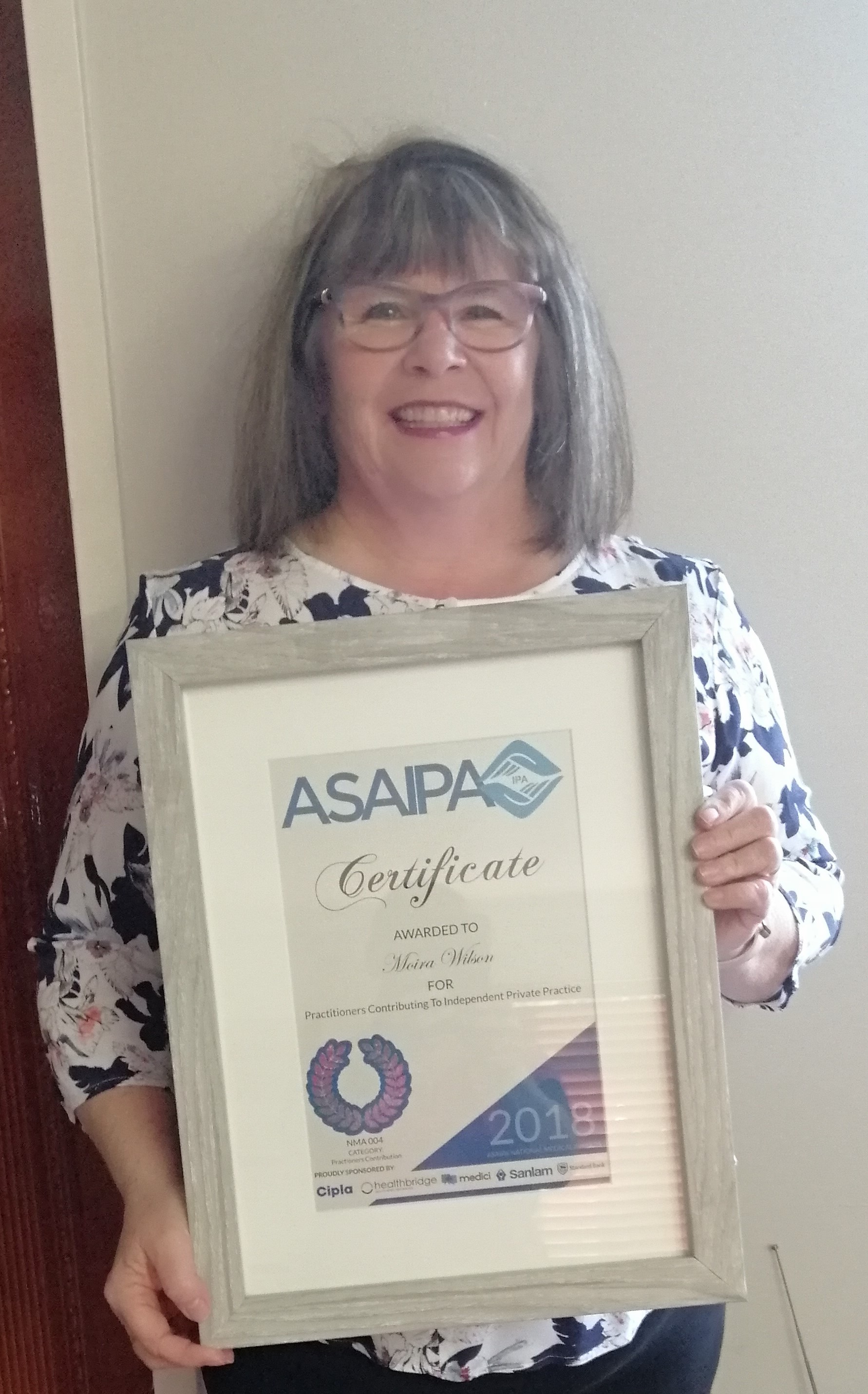 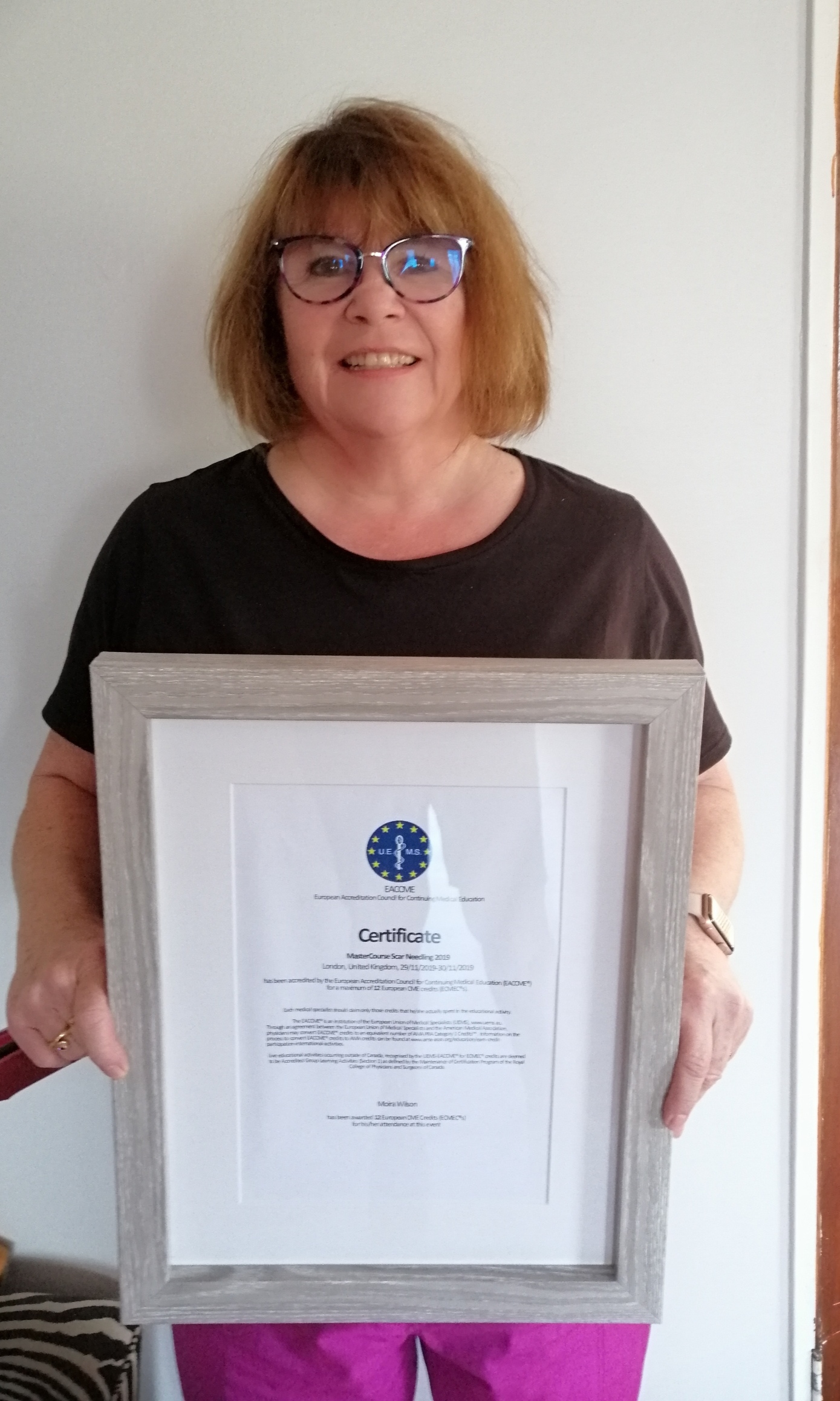 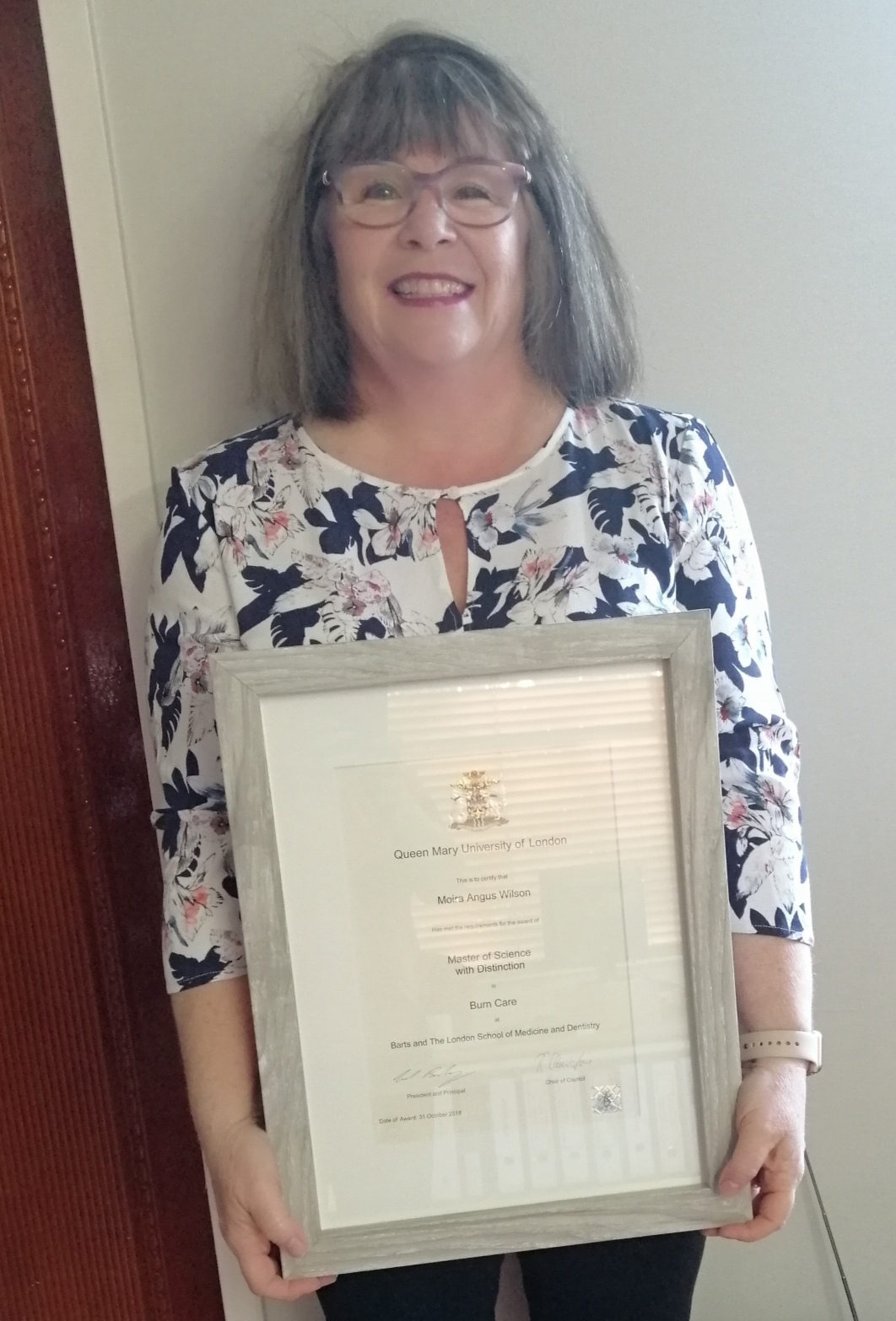 Nicole Murphy is our youngest physiotherapist and qualified in 2015 from the University of the Witwatersrand with a B.sc in Physiotherapy. 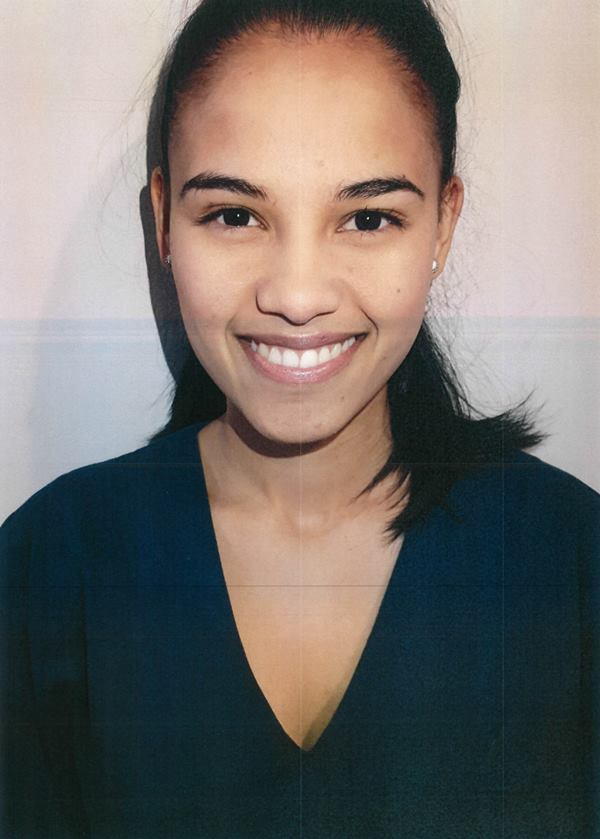 Shanu graduated in 1995 with a B.sc in Physiotherapy from the University of Westville, Durban.

She worked in various practices in Durban including Addington Hospital and St Augustine’s During her time in Durban she worked with a variety of conditions including Cardiothoracic and Surgical I.c.u. Orthopaedics, and Treatment of Spinal conditions.

She relocated to Johannesburg in 2003 and joined the practice in October 2004 and she has worked in the various disciplines including Trauma, Burns, Neurosurgical I.C.U. where she treats a wide variety of neurological and neuro surgical conditions. 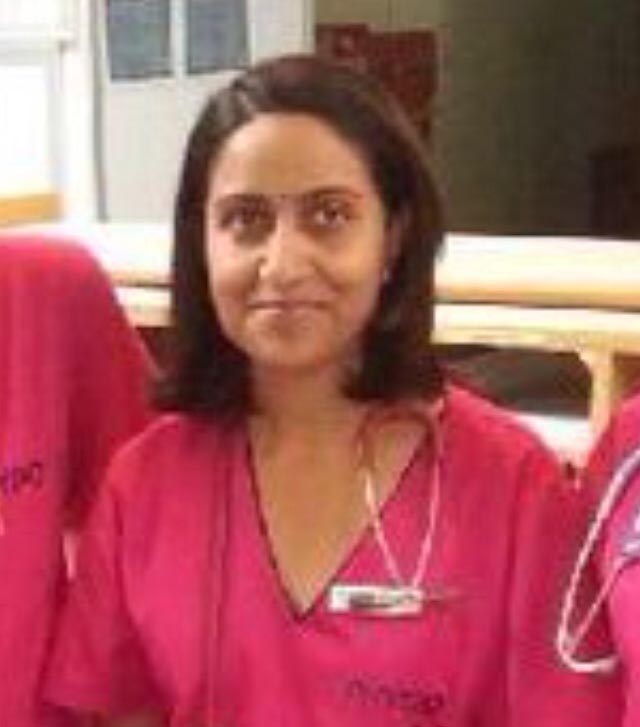 Andrea qualified in 2008 from the University of the Witwatersrand with a B.sc in Physiotherapy. She did her community service in Chris Hani Baragwaneth (C.H.B.H. )where she gained experience in Neurology, Medical, Trauma, and Paediatrics and out patients.

In 2010 she was promoted to Senior Physio running the Trauma Unit at C.H.B.H.
Her duties included education, and supervision of the 3 rd and 4 th Year Students from Wits.

She joined the practice in 2011 and has worked in Trauma I.C.U, Neuro surgical I.C.U.and Burns I.C.U.where her interests lie in respiratory and Physical rehabilitation.

She completed her C.P.T.1 Qualification in 2014 and is a member of the C.P.R.G. special interest group.

She represented the practice in 2013 at the World Transplant Games in Durban where she was part of the Medical team giving physiotherapy to various athletes. 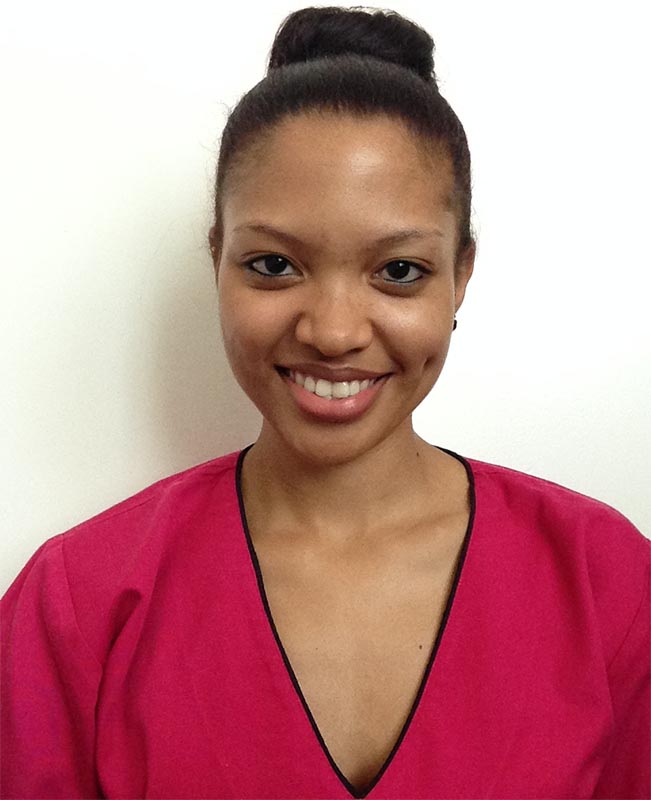 Giselle graduated from the University of the Witwatersrand as a qualified physiotherapist in 2016. She completed her Community Service Year at Pholosong Hospital, where she gained experience working in medical, surgical, orthopaedic and paediatric wards. She also worked in the ICU with a special interest in respiratory rehabilitation with trauma patients. Giselle joined the practice in January 2018 and is gaining experience working in the Trauma Unit. 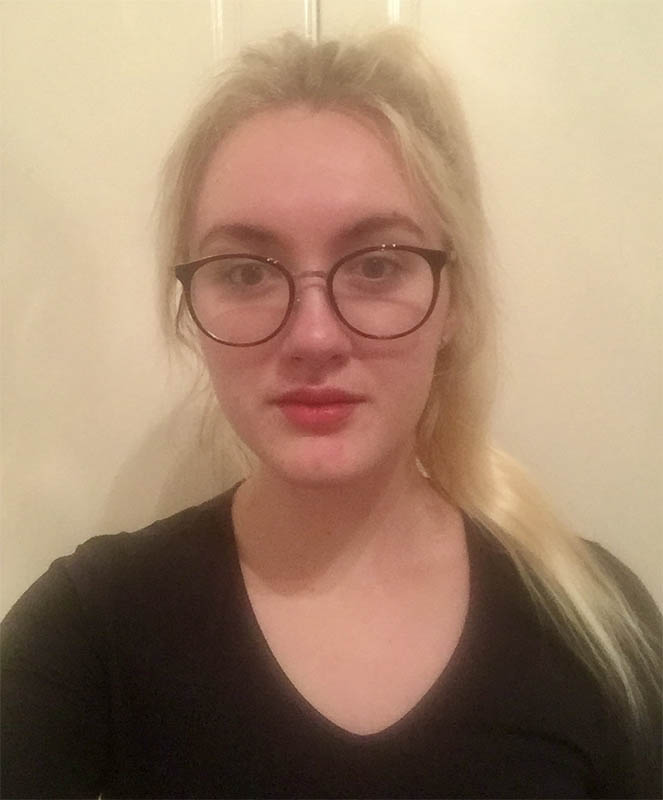 She worked at King Edward VIII and Inkosi Albert Luthuli hospitals before moving overseas to work at Sheikh Khalifa Medical Centre, where she was promoted to supervisor of the physiotherapy department.

Sanjna has worked in a variety of fields including cardiothoracic rehabilitation, orthopedics, spinal and neurology, paediatrics, ICU and sports. Her experiences include setting up a cardiac rehab unit, formulating and implementing protocols, student and staff training, sitting as an examiner for the Health Authority Abu Dhabi.

Over the years, Sanjna has completed and attended many courses including taping and acupuncture.

She relocated to Johannesburg in 2011. Since then she has been in private practice and has worked as a locum physiotherapist at Milpark. She joined the practice as a permanent member in 2019.

Tatum Michael qualified at Wits University in 2017 with a BSc (Hons) in Physiotherapy. Prior to this she completed her Bachelor of Health Science with Honours.

Tatum completed her community service year at Heidelberg Hospital where she gained experience working in a variety of fields which include paediatric, medical and neurological patients.

She has completed courses in dry needling, neurological rehabilitation and respiratory refresher courses.

Tatum has a special interest in respiratory rehabilitation in an intensive care setting. She joined the practice in January 2019 and is currently gaining further experience in the Trauma ICU.

Aarifah graduated from Wits in 2018. Thereafter, she completed her community service year at Charlotte Maxeke Johannesburg Academic Hospital where she gained experience in the Neonatal, Paediatric and Trauma ICU.

She then completed another 2 years in Government where she gained experience in Women’s Health, Chronic pain, public health and Neuro ICU. She joined us on a permanent basis in October of 2022 where she continues to gain further experience in the Neuro and Trauma ICU. 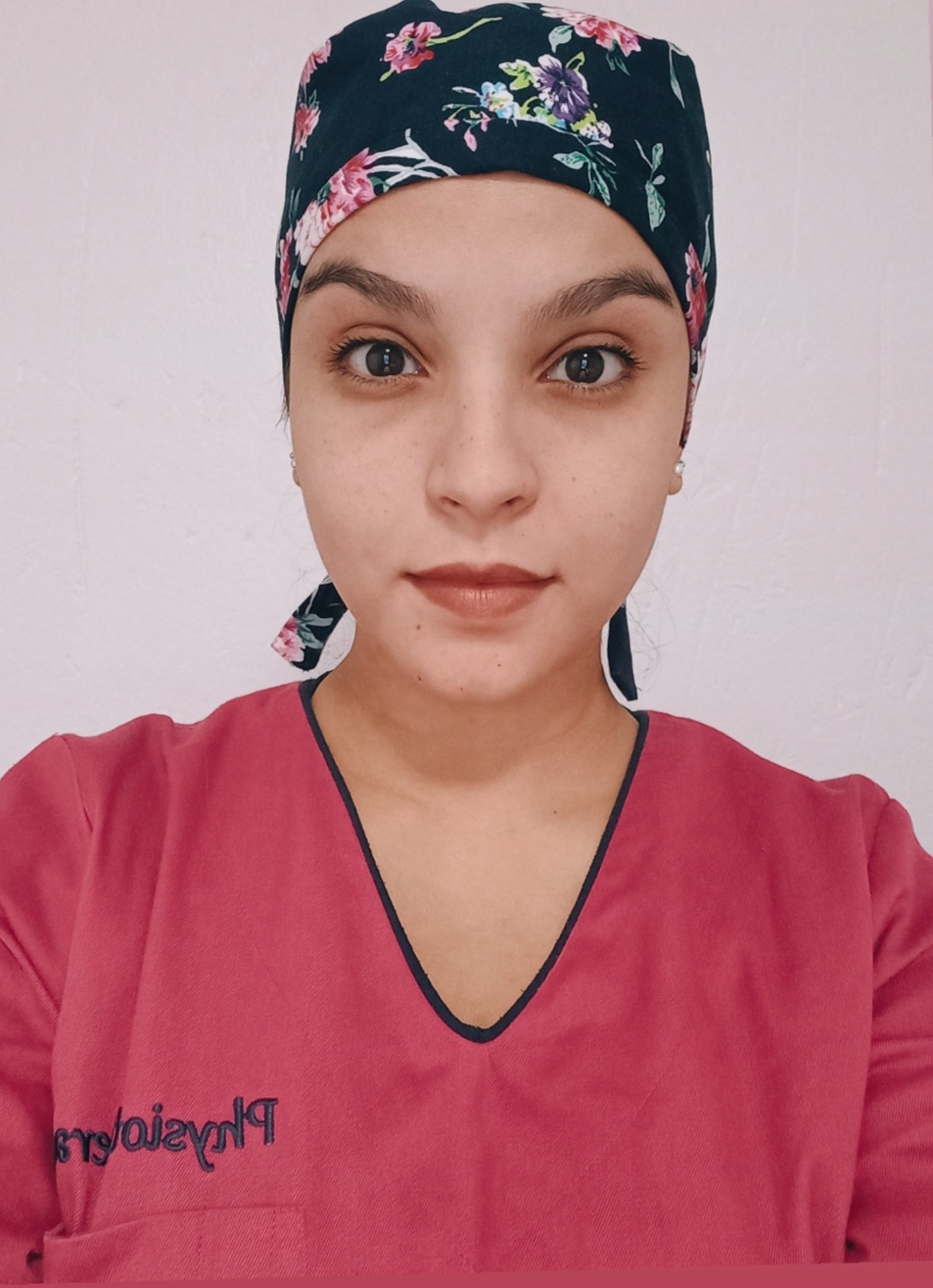 Hi, my name is Gabriella, Gabii for short. I am a passionate physiotherapist who loves helping those around me, patients and colleagues. I enjoy being active on my time off and I like to think I have a good sense of humor.

I love my job wholeheartedly and enjoy growing into the strong independent young lady I was made for. I give God all the glory in everything I do, I wouldn’t have the strength to be here today if it wasn’t for grace and love. 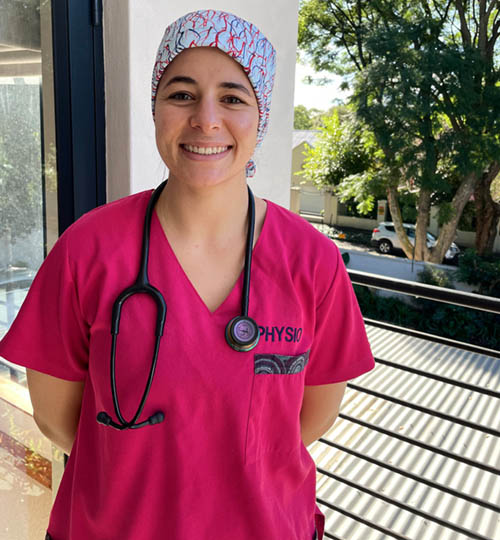 Sabrina graduated from the University of Witwatersrand in 2018; in which she was part of the winning team in the Comrades strap for life competition in her final year.

She completed her community service year at Chris Hani Baragwanath Academic Hospital in 2019, where she gained extensive experience in adult neurology, orthopedics, vascular conditions, medical conditions and burns in an in and out patient basis, as well as in paediatric cases and paediatric burns. She worked within the adult trauma, medical and burns ICUs, Paediatric ICU, Paediatric burns ICU as well as Neonatal ICU.

She has completed her Level 1 Dry needling course as well as introduction to Neonatal ICU care, as well as a course in Cerebral Palsy within her community service year.

Sabrina started working for Moira Wilson in 2020 and has completed multiple online courses covering covid, covid rehabilitation, stroke rehabilitation as well as pain management. She is excited to continue to gain experience within the ICU’s at Milpark further gaining knowledge in more courses as well as through her work experience. 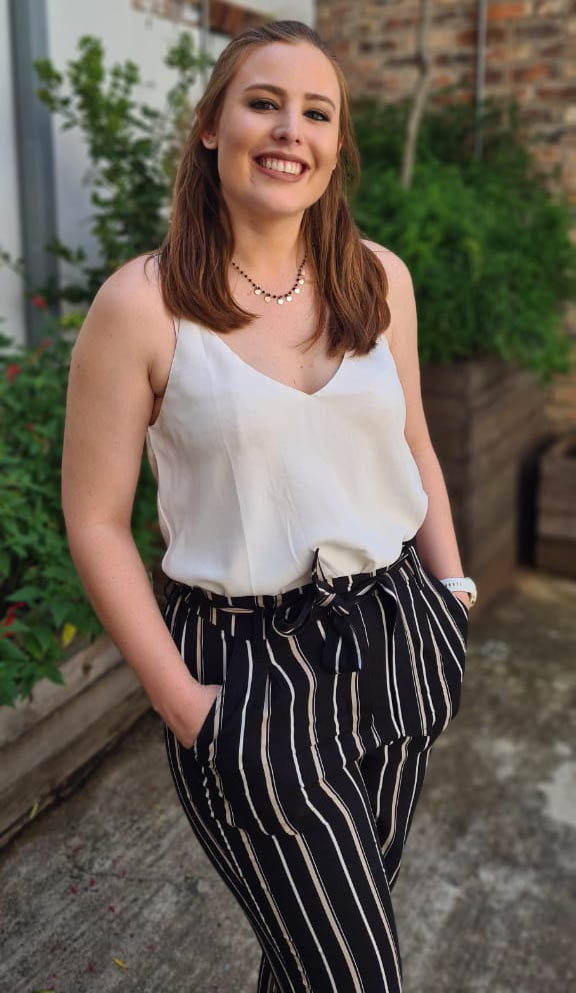 Anna Longano is our Practice Manager and General Administrator.

Having worked in the medical industry for over 25 years, from Podiatry and Ophthalmology all the way to Reconstructive surgery, she’s seen and done it all. There’s not much that she cannot accomplish and this makes her a valuable asset to our team. 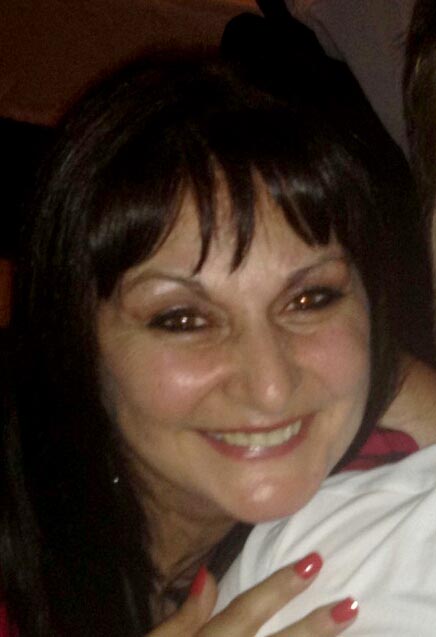 Hi, my name is Amanda Naidoo. I do the private and IOD claims administration for Moira Wilson Physiotherapy. I qualified as a beauty therapist and working oversees for 2 and half years.

When I came back I decided on a career change and went into accounts where I have been for the last 12 years. I absolutely love it and especially even now in the Medical Sector. It comes with its own a new challenges.

I am Belinda Swart, your Medical Claims Administrator at Moira Wilson’s Physiotherapy Practice. I have more than 25 years of Debtors experience and worked in the Medical Field for 5 years.

I am in Liason with the Medical Aids for your Authorisation numbers, Benefits and Claims.

Our practice hours are from 7.00 am till 4.00 pm Monday to Friday. We also operate an on-call rotation system for any trauma patients requiring physiotherapy.